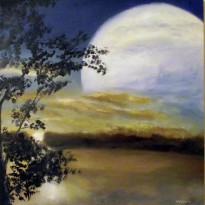 Neurosurgeons Are Insecure Too The Slender Thread by Yvonne Whittal

This was a fun, furry ride with a hotter than hawt gold chain wearing neurosurgeon going all caveman over a sweet young thing.

The story starts off with the little sun kissed darling being doomed to spend the rest of her life in a wheelchair.  Another slobbering older neurosurgeon wanted to be her hero and got his buddy (our hero) to come and save the day and perform a miraculous surgery so that she can walk again.  After a few snips and some alpha moves, voila'!, our girl is whole again.

Because all doctors take their patients on multiple outings and show off their pecs, Dr. Groovy goes on a three day binge of platonic excursions with our little sun blossom such as picnics where we get a fantastic description of his unbutton shirt showing off his crisp chest hairs accented with a crucifix.  Felt natural to me...cough.  And since Dr. I'm-Too-Sexy-For-My-Shirt doesn't want to settle for anything less than true love in its purest form, our hero drops off the face of the earth for a year to make sure any mere gratitude has worn itself out while also given Dr. First-Slobber a chance to make his move.  But don’t bite your nails too short worrying that our cool couple might not ever see each other again, we have one of those coincidental hook-ups when Daddy and baby girl go on a tour of Europe.

Keeping with typical doctor-patient relationship, Dad and Sunshine gets invited to stay at the hero’s home for an extended stay.  By the end of the visit, it was mad, obsessive love times two.   But apparently our hot and hairy hero went to medical school and became a miracle worker in order to compensate for some deep seeded insecurities.  After two weeks of uninterrupted bliss, Dr. Oh-Yes! became Dr. Oh-Noes!

In our hero’s defense, our heroine had a totally TSTL moment(actually, numerous said moments) when she allowed herself to get sucked into a transparently bad deception by the sister-in-law who felt it was more favorable to ruin her sibling’s marriage than to go get her own life and let Dr. Big-Brother know that she was being poked by a hot but seriously overused man-tool.  Of course, Dr. I’m-Not-Worthy always walked in at the perfect point of the conversation that made it sound like little wifey and Mr. Whoredog (baby sister's man-meat) were going at it hot and heavy.  But ever the loyal dim-bulb, our heroine went along with the unnecessary ruse and allowed her hubby to believe that after 22 years of clinching tight to that v-card, she suddenly got a taste for clinching other things (wink wink nudge nudge).

After things get drug out waaaay too far, the heroine takes a red eye outta there, while Dr. Can-Of-Whoop-Ass beats the truth out of Mr. Goodbar, leaving our remorseful hero dog-faced and shit outta luck when he fails to make the plane on time.  Things get tidied up at a convenient run-down but quaint seaside villa, then off they go to visit Daddy and rub their happiness in the face of the poor schmuck (the aforementioned Dr. First-Slobber) who introduced them.